Spirit Boards and How To Use Them 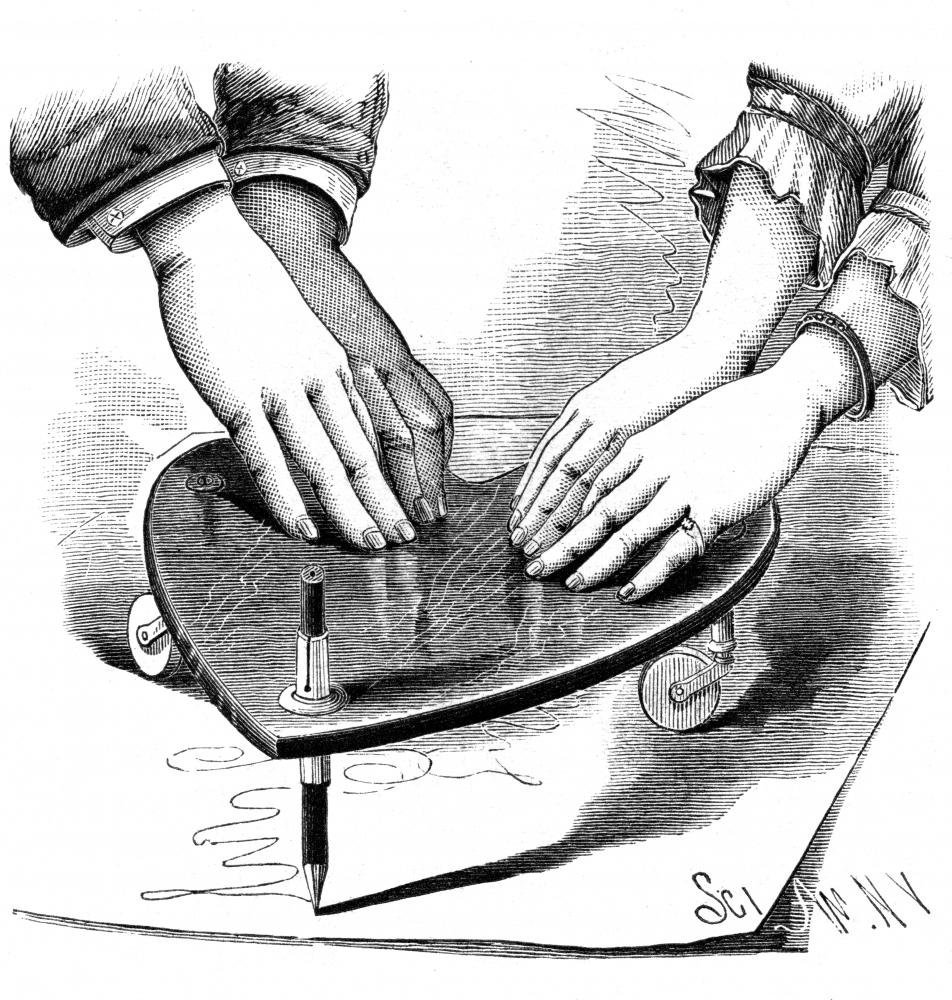 SPIRIT BOARDS AND HOW TO USE THEM

For this month’s lesson on divination we will be looking at spirit boards, one of my favorite subjects, and appropriate following our last lesson on how to work with one’s ancestors. When it comes to reading the signs for this particular form of divination it couldn’t be easier, given that letters literally spell out the answer for you, making it one of the easiest form of soothsaying available. The ease with which it may be used is why it has remained popular for well over a century. Clearly, not all conjure workers use a spirit board, indeed, many are of the opinion that it is dangerous, an invitation to consort with devils. If this aspect of work does no appeal to you, then skip it; there will be several other methods of divination that we will explore throughout this course.

I have spent the last decade designing and manufacturing talking-boards for my company Carnivalia, and long before then was an enthusiast of the Ouija, an admirer of its functional artistry and amateur folklorist of its legends and practices. Past articles that I have written on the subject have covered its history and techniques, some of which I will touch on here; however, my larger focus is to examine the various paradigms that are used to describe the phenomenon that spells out so many inspiring, damning and cryptic messages. What I have determined from my years of working with spirit boards and by corresponding with others is that the manner in which you approach the Ouija guides and defines your experience.

What is your expectation as you place your fingers on the indicator? Is it to communicate with the dead, and if so then what are your views on spirits and their place in the universe? Is it to communicate with your own unconscious, then what do you believe the boundaries of your psyche to be? The experience you have with the spirit board is guided by your own intentions and beliefs, and therefore understanding yourself and your worldview is essential to promoting a beneficial experience. Of course, some intentions are destined to provide a negative outcome, as with someone seeking an uncanny and scary experience by asking the board when they will die. Personal views of the spirit world can also be detrimental to a positive experience; such as the belief that the Ouija corrupts the natural order by opening portals into the forbidden realms of the dead. We will investigate which practices work well with the Ouija, which spiritual and psychological models best allow for useful communication, and how to overcome the board’s negative reputation and our own possible fears in order to have a productive experience. First, however, it serves us to understand the history of the spirit board; for what purpose was it created and what cultural setting supported it.

Mid-nineteenth century America developed a great interest in spiritual communication, spawned by the Fox sisters and popularized by the Spiritualist church movement. The Victorian interest in technology was applied to spirituality, and designs for a then modern device with which to communicate with the deceased resulted in writing planchettes and psychographs. Reports of talking-boards appear as early as 1886 in an article titled The New Planchette, which appeared in Carrier Dove, a Spiritualist publication. Before being considered a toy, the talking-board was genuinely used for communication between the living and the dead. at same article describes the board as having the words good-evening and good-night, which tells us the time of day when this activity was pursued, in the lamplight hours after supper when folk retired to the parlor. This was time set aside to socialize, with the living and the dead.

It was not until 1890 that a Mr. Elijah Bond claimed the talking board as his invention, although it is unlikely that he was the first to design such a board, merely the first to run with it to the patent office. The name he gave his device was Ouija, with the claim that the talking-board was itself asked what it should be called, and had named itself by responding with the name Ouija. After William Fuld took control of the Ouija Novelty Company in 1901, he claimed himself to have been the inventor of the board, and to have named, putting forth the idea that Ouija took its name from a joining of the French word oui for yes, and the German word ja for yes. 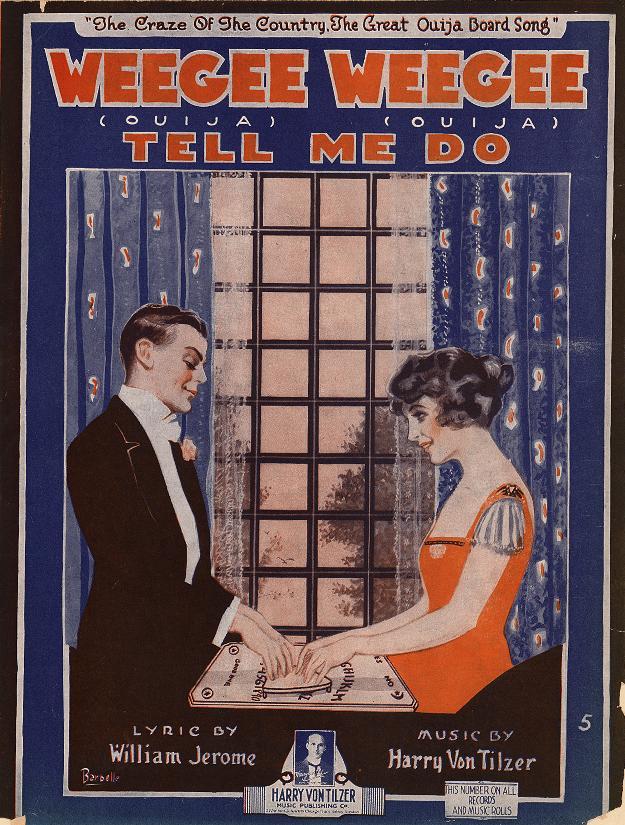 The most popular era for the Ouija board came in the nineteen twenties following World War One. The war had taken its toll on American soldiers, and folk took solace in the idea that they could communicate with their beloved dead. A song from the era by William Jerome and Harry Von Tilzer bombastically called ‘Weegee Weegee Tell Me Do: The Craze of the Country, The Great Ouija Board Song’ gives some insight into the Ouija’s popularity:

There is a game played by nearly ev’ry family

Seems to be the thing-

Rich and poor folks play this little game to see what future days may bring.

Not only does this song praise its popularity, it also suggests that the board was used among various classes, rich and poor alike. So how was it that something so commonplace and popular, something whose reach covered not only extremes of American society but the lands of physical reality and the spirit world alike, lose favor to become a hackneyed horror movie prop? e fact is that spirituality and religion are both subject to the same influences that lessen any fad, perhaps especially so, since miraculous phenomena in excess becomes common and therefore uninspiring.

Although the consumers most interested in this device were Spiritualists, there were few markets to support such sales, and therefore they found their home on the shelves of toy stores, as novelties (a term that also kept their manufacturers from being prosecuted over any false claims concerning their supernatural abilities).

By 1944, with a second World War about to end, the American populace’s interest in the occult had taken a more sensational turn, and the Ouija left the parlor for the silver screen, though not in a starring role, but as a prop for the horror film title ‘The Uninvited.’ This trend continued, and by 1973 Captain Howdy served as young Regan’s gateway to Satanic possession in ‘The Exorcist.’ More recent movies and television shows have continued the sensationalism, so it is little wonder that their reputation in popular culture is skewed towards the demonic.

Now that we are better acquainted with the cultural context in which the Ouija found popularity and eventual ill repute, we have something with which to compare current beliefs and practices. I divide these modern beliefs into the categories Spiritual and Psychological. Since talking-boards were initially marketed towards persons seeking to communicate with spirits we will first explore Spiritual theories.

Where the spirit world is in proximity to our own tells us much about a culture’s relationship to it, as does the manner by which souls are said to exit or enter our world. Beliefs positive towards the dead express how life is enriched through continued interaction with them. They can surround us at any times to bring us company or aid, but like ocean tides are felt most strongly at twilight, more so even when the moon is full. The separation between our worlds is often described as being like a veil, or sometimes as a fog that we must learn to gaze through in order to see our beloved standing there.

You needn’t be a believer in spirits to get something out of working with a talking-board, which brings us to the subject of Psychological theory, the idea that the planchette is controlled through an ideomotor response. Essentially this theory holds that our un- conscious causes our hands to move the planchette, beneath the acknowledgement of our awareness. While many find this theory lacking in mysticism, it nevertheless provides a window into our psyche; and there is a metaphysical component to those seeking it. Some believe that our minds are not merely contained inside our skull, but can access areas of knowledge that we are not consciously aware of. If you believe that we are capable of psychic phenomena such as ESP and precognition then the ideomotor theory still has much to offer.

Choosing an ideal condition is important, particularly in regards to time and place. The veil between the worlds of the living and the dead are said to be thinnest at certain times, such as twilight and midnight. Harsh daylight provides an uncomfortable atmosphere for spirits. Pay attention to the mood that is being set, as this will influence your experience, and that of your spirit visitors. Ideally you should feel secure in your environment. Some folk go further, setting protective boundaries such as circles of salt to work in. This is often done to protect against evil spirits. Personally, I am more concerned with the meddling of unwanted mortals in my space than I am with bothersome spirits.

For many though, protection against evil spirits is a concern. Leaving your bible open to Psalm 91 is a simple way to avoid trouble. Also, a silver coin placed on the board is said to protect against bad spirits.

In much the same way that you might offer something favorable to a visitor, spirits likewise appreciate hospitality. If you plan to call on your grandpa, and you know that he enjoyed chicory coffee and cornbread, then those would make for a splendid offering. Short of that are the more common offerings familiar to Hoodoo workers, such as flowers, incense, or whiskey. Assuming you are not working with someone who had issues with alcohol, I favor using a shot glass in place of a pointer (set upside down, rim against the board, your fingertips resting on top), then filling it with whiskey as a thank you after the session has been completed.

Offerings are often placed beyond the top of the board. Be sure they are not set in such a way as to get knocked over, especially if you are working as a group with folk sitting in various positions. You can work on the floor or on a table, whichever you prefer.

Along with offerings, if you have a personal concern belonging to the spirit about to be invoked, say a picture or old hairbrush, place it with your offerings.

Additionally, I always set out a glass of water, as that is said to draw spirits and help them better manifest in the realm of the living.

Once everything is in place, verbally call the name of the spirit you wish to invoke. To get the pointer started, I like to use my own energy to move it continuously as a sideways figure 8, known as a lemniscate pattern. Eventually, when the spirit I have contacted is ready to speak, the pointer will waver from that pattern and begin spelling messages.

I find it best to have a recording device turned on, and to say aloud each letter, as this help to later decipher longer messages.